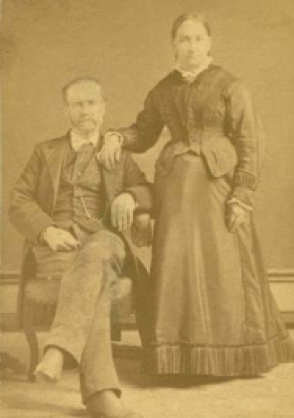 As the only working stagecoach stop left on the Santa Fe Trail, Mahaffie Stagecoach Stop & Farm offers unique experiences and opportunities that engage visitors of all ages in discovering 1860s farming, life on the Kansas frontier, and stagecoach travel.

The Heritage Center, opened in 2008, is a “portal” to the historic grounds.

Rent the Heritage Center for your wedding and party rentals.

The Agricultural Heritage Barn, completed in 2014, provides visitors with an agricultural experience year round and the opportunity to learn more about the Mahaffies’ prosperous, Civil War era farm. (linked to barn page)

Arriving in Olathe in 1857 from Logansport, Indiana, James B. and Lucinda Mahaffie purchased the farm site you can visit today:

The Barlow, Sanderson and Company Stagecoach Line contracted with the Mahaffie family to provide one of the stops needed for their coaches carrying passengers and, in some cases, mail between Fort Scott and Fort Leavenworth, and from Independence, Missouri all the way to Santa Fe, New Mexico.

It is believed the Mahaffies started serving travelers from their first home as early as 1858. By 1864, coaches began using the farm as a stop. Late in 1865 and until about 1870, coach passengers and other hungry travelers took their meals in the basement of the “new” stone farmhouse, designed to serve as a kitchen and dining hall.

In 1867, Lucinda, her daughters, and hired helpers might have served as many as 50 to 100 meals a day. While coach passengers ate, incoming teams of horses were switched for fresh animals. Follow in the footsteps of these same passengers and travelers when you visit!

James ‘Beatty’ Mahaffie was first, and foremost, a farmer and identified himself as such when state and federal census’ were taken. The family did not suffer when the railroad arrived in Olathe in 1869, ultimately ending stagecoach operations through Olathe. Beatty helped serve on the board of directors of the original organization that was predecessor to the railroad company that would finally be responsible for bringing the train to town.

Prosperous and respected members of the community, James and Lucinda retired from farming in the mid-1880s. They purchased a home in Olathe and moved into town.The couple enjoyed another 20 years together before Lucinda passed away in 1903, and Beatty in 1907. Both lay at rest in the Olathe Memorial Cemetery just a few miles away. The farm changed hands a number of times until the 1970s.

The Mahaffie home and adjoining property was purchased by the City of Olathe in 1979 to ensure its preservation and operate as a museum and historic site.

Free viewers are required for some of the attached documents.
They can be downloaded by clicking on the icons below.